Huron was incorporated on May 5, 1863, and is the founding college of Western University. Originally established as Huron College, Huron changed its name to Huron University College with Royal Assent in June 2000. To be part of Huron is to be part of one of the oldest university communities in Canada.

Get involved in Huron's most ambitious fundraising campaign in our university's history.

Huron began as a theological college and was founded by Bishop Benjamin Cronyn. Huron College was incorporated on May 5, 1863 and officially opened its doors on December 2, 1863.

Huron’s original location was known as Rough Park and occupied the block bounded by Grosvenor, St. George, St. James Street and the Thames River. The property had previously been owned by Lionel Ridout, a local hardware merchant, who died in 1859 leaving the property heavily mortgaged.

On February 20, 1877, Huron alumni and students met at Christ Church, London with the purpose of forming a university to provide the highest scholastic training. In 1878, Bishop Hellmuth applied to the Provincial Government for the incorporation of “a College with University powers” and on March 7, 1878, a charter was granted to “the Western University of London, Ontario” later to become The University of Western Ontario. The Act authorized the affiliation of Huron College with the University and since this time Huron has retained its relationship with Western.

1951, Huron moved to its present location and has since seen major growth not only in its student enrolment, but also in its residence facilities, classrooms, library, and faculty offices. From its modest beginnings in 1956 with 45 full-time students, the Faculty of Arts and Social Science (originally the Faculty of Arts), now boasts a student enrolment of close to 1300 full-time students. Our Faculty of Theology continues to attract students to its Master of Divinity, Master of Theological Studies and Master of Arts in Theology programs. The two Faculties enroll a diverse student body, with students from every province and some 30 different countries.

From the moment that first class of 13 students sat down with their teacher, Isaac Hellmuth, in the winter of 1863, Huron has been a people place, known for its small classes, individual attention from faculty, and commitment to academic excellence. Huron has grown to become one of Canada’s leading university institutions, one where students are encouraged to grow intellectually and personally in a supportive, involving and challenging community environment. 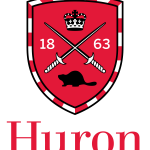